Clear All
We can't find products matching the selection.

Initially, Reference 6234 did not have “Rolex Daytona Cosmograph” written on its dial. It was launched in 1955 with a plain “Chronograph” label on it. The company made 500 of these watches yearly from the time it was released. Its production stopped in 1961 due to its unpopularity among its rival brands. Today, however, these so-called “Pre-Daytonas” or Rolex Daytona Stainless Steel models (silver or black dials with stainless steel cases) are very hard to find and have a staggering initial price of £15,000.

This watch got its name from Daytona Beach, Florida – where the first automobile races were held. One of the most famous race car personalities, Sir Malcolm Campbell of England wore this Rolex watch both on and off the racetrack back in the 30’s when he gained the world speed record on land. He even wrote a letter to Rolex in 1931, praising the durability of their Oyster case. 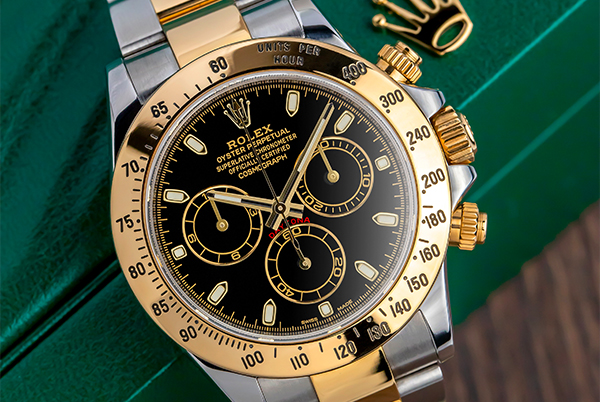 In 1962, Rolex became the official timekeeper of Daytona. As a tribute, the company gave the nickname “Daytona” to its upcoming model Cosmograph Reference 6239 that was launched a year later. This wristwatch has a more prominent tachymeter scale on its bezel compared to its counterparts. This feature was intently fashioned for race car drivers. No wonder, it has become the leading icon amongst the wrists of racers to grace the Daytona race track.

Paul Newman, both an actor and a race car celebrity, was known to be a big fan of this Daytona Rolex chronograph. He was inseparable from his watch whenever he competed. It even led the collectors to use his name when referring to this type of Daytona watch in the 80’s. Aside from the embossed tachymeter, this model has multi-coloured seconds scale which makes it easily recognizable.

Reference 6240, which debuted in 1965, has screw-in push buttons almost the same as in Oyster cases but it has no stopwatch functions. This Rolex Daytona for sale UK has an acrylic decor. The company returned to producing etched steel bezel and loose push buttons when they launched Reference 6262. It was manufactured for only one year (1970) and is considered as a rare model. Rolex also upgraded its movement quality by raising the frequency of Valjoux calibre to 21,600 vph.

The Rolex Daytona is one of the most desirable luxury watches on the planet at this moment. It features timeless appeal, superior quality, and X-factor for people who want to stand out. No wonder, it is the dream timepiece of those who want to take their sophistication and class to the next level. And when it comes to Rolex Daytona price, The approximate price of Rolex Cosmograph Daytona Full Yellow Gold Champagne is £26,995.

The newest versions of Rolex Daytona are powered by an in-house movement called Calibre 4130. It comprises 44 jewels, a 72-hour power reserve, and KIF shock protectors for its interiors. This design makes this timepiece one of the most coveted sports watches ever made. The Rolex Daytona 2019 collections give you a glimpse on what to choose from and check out the Rolex Daytona price.

The great thing about the Rolex Daytona is that it comes in a wide array of customisation options that suit various styles, character, and personalities. Amongst the models you can select from include Rolex Daytona gold, Rolex Daytona Rainbow, Rolex Daytona Rose Gold, and more. Most of these can be set with your favourite gems as well. Explore Time 4 Diamonds now and buy pre-owned Rolex Daytona for sale at the best market prices!

Now Shopping by
Clear All
Filter by Model
Sale Products
There are no products matching the selection.