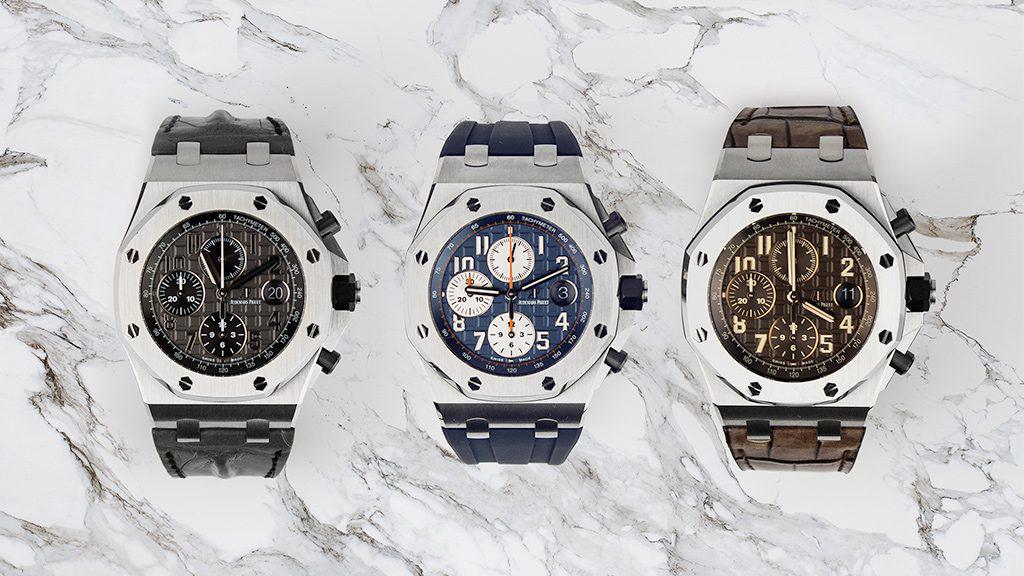 [vc_row][vc_column width="2/3"][vc_column_text]The Audemars Piguet Royal Oak Offshore series is perhaps one of the most successful luxury watch designs of the last twenty five years, with numerous notable references, some reaching cult status. In this blog we’re going to take a look at three classic examples we have here in stock at Time 4 Diamonds, the Navy, Havana and Elephant models and discuss the differences between them.

We’ll start by taking a look at the Audemars Piguet Royal Oak Offshore Navy (26170ST). As its name suggests, this watch comes with a stunningly beautiful white mega tapisserie dial, with striking navy blue chronograph registers and a matching blue, rubber strap with steel pin buckle. Like other Offshore models in the range, the Navy features the classic case design, beefier crown and pusher guards and ceramic pushers and crown. For some, the Royal Oak Offshore Navy model is a Marmite product, you either love it, or you don’t. Either way, this is a simply stunningly elegant watch that would take pride of place in anyone's collection - take a look at our example on our site.

The Audemars Piguet Royal Oak Offshore Elephant (26470ST) is another classic example from the iconic series. Released in 2014, the Elephant received a mixed reception at SIHH, but this particular second generation Offshore model quickly became a favourite amongst collections, earning the fond nickname “The Elephant” due to its unique grey and black colour scheme. Like other Offshore models, the Elephant is fitted with the trademark mega tapisserie dial, this time in slate grey, with black registers and black Arabic numerals. The black luminescent coating on the dial means that it displays different shades and hues of grey depending on the light conditions. The Elephant features a distinctive hornback alligator strap, with stainless steel pin buckle that tapers to 20mm - different to the Offshore Divers watch for example. When looking at an Audemars Piguet Royal Oak Offshore Elephant, it’s easy to see why it’s become such a popular watch for enthusiasts and collectors a like - take a look at our own example to see why.

Our final example of the Audemars Piguet Royal Oak Offshore range is the Havana (26470ST) model. Like the other Offshore offerings, the Havana model features a stainless steel case, glare-proofed sapphire crystal and caseback, black ceramic pushers and screw-locked crown. Aesthetic differences with the Havana model include a mega tapisserie pattern brown dial, with brown counters, arabic numbers with a beige luminescent coating that glistens in the light. The watch sports pink gold Royal Oak hands and a brown inner bezel, topped off with a beautiful hand-stitched, “large square scale”, brown alligator strap with stainless steel pin buckle. This is a truly beautiful watch which you have to see to truly appreciate. Take a look at ours here!