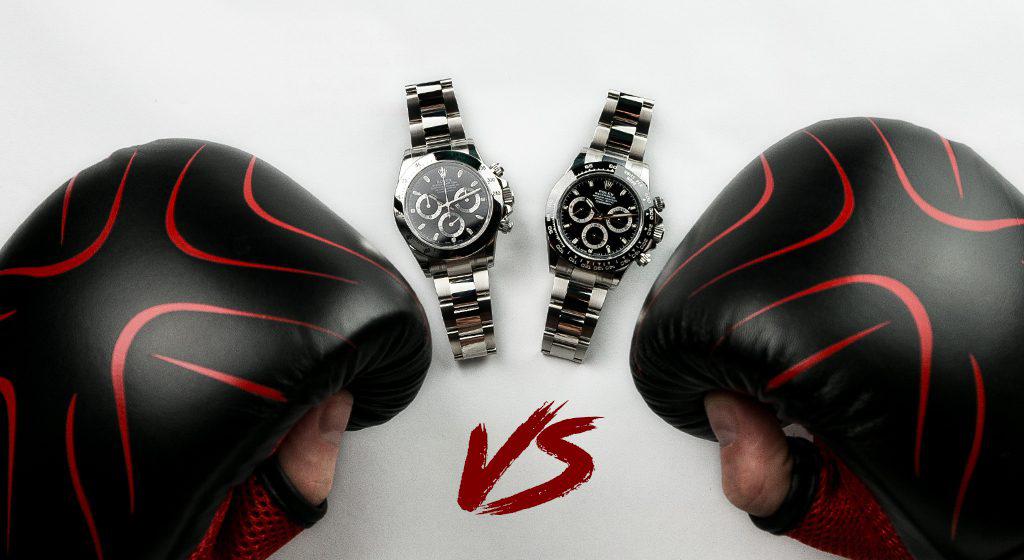 [vc_row][vc_column][vc_column_text]The Rolex Daytona is perhaps the most iconic chronograph watch of the twentieth century and with good reason. Designed and introduced in 1963 to meet the demands of professional racing drivers, its highly-reliable chronograph and bezel with tachymetric scale allows drivers to perfectly measure speeds up to 400 miles an hour. Few things have changed since its introduction, but there are some elements that mark the 2016 116500LN model out from its predecessor.

Any new edition of this iconic watch is sure to garner attention in horologist circles. In 2013, half a century after the Daytona’s introduction, Rolex celebrated the anniversary by introducing a platinum-case model, equipped with a brown ceramic bezel and blue dial. Contrary to expectations, the 116506 model was not the modernised example fans were hoping for. This was however remedied when Rolex released the 116500LN. These 2016 models bare great resemblance to the 1988-2000 models, which were the first Daytonas to sport automatic movements, instead of the hand-wound calibres used from 1963 onward.

In 1988 the Daytona saw some big updates: a 40mm case (instead of the 37mm), crown guards, sturdier lugs and of course an automatic movement - the 4030 caliber, a heavily-modded Zenith El Primero movement. These 16520 models were a staple of Rolex’s offering until 2000, when Rolex produced their own automatic movement and moved the chronograph hour recorder from 6 o’clock to 9 o’clock, introducing the 116520 reference, which continued for 16 years of production.

The biggest update introduced with the 2016 Daytona is of course the bezel. It manages to refresh the design, whilst maintaining the model’s vintage aesthetic. Rolex’s first ceramic ‘Cerachrom’ bezel was introduced in 2005 and has gradually been introduced across the range. The diamond-polish finish, combined with the colour-fastening ceramic make the bezel virtually impervious to scratches and colour degradation. Among other small changes, the tachymeter numbers now follow the curve of the bezel, rather than having all the text on the same axis. The Daytona 116500LN case remains the same at 40mm, without the addition of maxi-lugs or anything that would have Daytona purists manning a boycott.

Aside from the bezel, the dial is the only other part of the 116500LN to see any changes. Available in either Black or White, the most overt change is the rings surrounding the subdial - the white dial now has a black ring around the chronograph totalisers, giving it an almost panda-like look.

The differences between the 116520 and the 116500LN Daytonas are nominal at best, but do divide fans and collectors alike. It’s fair to say that any Daytona reference is likely to be collectable, racing and silver-screen legend Paul Newman’s own model is set to fetch over one million dollars at auction in the coming months.