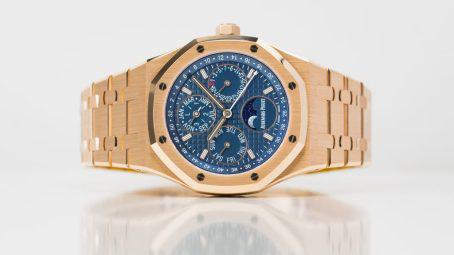 [vc_row][vc_column][vc_column_text]Now that the dust has settled on the first major watch fair of the year, we step back and take a look at some of our favorite watch releases from SIHH 2018 from Audemars Piguet, Cartier, and Richard Mille.

One in particular that stood out to us with the Audemars Piguet Royal Oak Offshore Selfwinding Chronograph Anniversary—a re-edition of the inaugural Royal Oak Offshore from 1993. When the Royal Oak Offshore made its debut in the 1990s, it caused major waves in the market for its 42mm case, with many criticizing the watch for being much too large. However, fast-forward to today and the ROO has enjoyed plenty of success during its 25-year history, particularly among customers who appreciate oversized watches.

With its stainless steel 42mm case topped with the familiar octagonal bezel with exposed screws, a matching stainless steel integrated bracelet, a “Petite Tapisserie” patterned dial in blue, and rubber-clad crown and chronograph pushers, the new anniversary Royal Oak is essentially an almost identical reissue of the original. The new Royal Oak Offshore Chronograph Anniversary does include a different movement, however, the automatic 3126/3840 with a 50-hour power reserve. 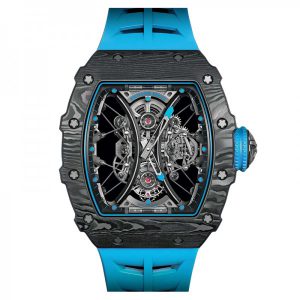 No stranger to making extreme watches, this year Richard Mille outdoes itself with a new RM 53-01 Tourbillon Pablo Mac Donough that is virtually indestructible. As its name implies, the watch was inspired by Argentinian polo star Pablo Mac Donough and the intensity of his sport. While this is not the first Richard Mille watch for Mac Donough, the RM53-01 is markedly different than the preceding RM53—rather than hiding behind a metal shield, the new RM polo watch is in full view.

At first glance, the new 2018 RM 53-01 Tourbillon Pablo Mac Donough does not look like it would withstand a brutal polo match, but that is precisely what is was built for. Thanks to its laminated sapphire crystal (aka “armored glass”) and Carbon TPT case, the openworked Caliber RM53-01 movement—with a tourbillion mechanism no less—is well sheltered. Moreover, the movement hangs within the case via Richard Mille’s innovative cable suspension system, offering shock absorption to more than 5,000Gs.

The signature Richard Mille tonneau case is presented on a blue rubber strap, which matches the blue crown, and blue details on the dial.

Moving away from sports models, we now turn our attention to the very elegant Drive de Cartier dress watch. Cartier’s newest kid on the block, the Drive only joined the Maison’s lineup in 2016.

For this year, Cartier offers the time-only Drive Extra-Flat model in two new metals, stainless steel and yellow gold, to join the pink gold and white gold models that came out last year. And they’re gorgeous. Sporting a cushion-shaped case measuring 38mm x 39mm, the Drive Extra-Flat is only 6.6mm thick, offering great comfort on the wrist. Encased in that super slim case is the Cartier Caliber 430 MC hand-wound movement. The dial of the watch is iconic Cartier with the black Roman numerals and blue sword-shaped hands.

Three great new models from three fantastic luxury watch brands. With SIHH behind us, the next big watch event of the year is of course, Baselworld, and we can’t wait to see what’s in store for us there.[/vc_column_text][/vc_column][/vc_row][vc_row][vc_column][vc_btn title="View Our Audemars Piguet New Collection" style="3d" color="warning" size="lg" align="center" link="url:https%3A%2F%2Fwww.time4diamonds.com%2Fall-watches%2Fshopby%2Faudemars_piguet.html||target:%20_blank|"][/vc_column][/vc_row]